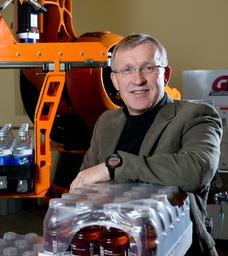 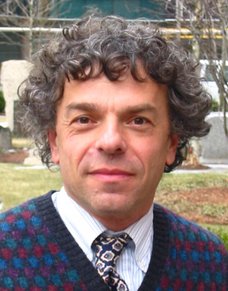 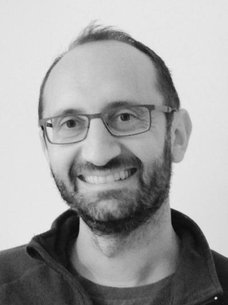 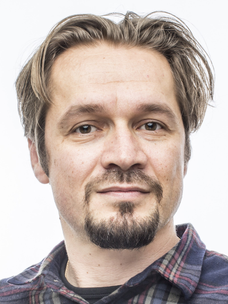 Klaus-Robert Müller received the Diploma degree in mathematical physics in 1989 and the Ph.D. in theoretical computer science in 1992, both from University of Karlsruhe, Germany. From 1992 to 1994 he worked as a Postdoctoral fellow at GMD FIRST, in Berlin where he started to built up the intelligent data analysis (IDA) group. From 1994 to 1995 he was a European Community STP Research Fellow at University of Tokyo in Prof. Amari's Lab. From 1995 until 2008 he was head of department of the IDA group at GMD FIRST (since 2001 Fraunhofer FIRST) in Berlin and since 1999 he holds a joint associate Professor position of GMD and University of Potsdam. In 2003 he became a full professor at University of Potsdam, in 2006 he became chair of the machine learning department at TU Berlin. He has been lecturing at Humboldt University, Technical University Berlin and University of Potsdam. In 1999 he received the annual national prize for pattern recognition (Olympus Prize) awarded by the German pattern recognition society DAGM, in 2006 the SEL Alcatel communication award and in 2014 he was granted the Science Prize of Berlin awarded by the Governing Mayor of Berlin. Since 2012 he is Member of the German National Academy of Sciences Leopoldina and he holds a distinguished professorship at Korea University in Seoul. He serves in the editorial boards of Computational Statistics, IEEE Transactions on Biomedical Engineering, Journal of Machine Learning Research and in program and organization committees of various international conferences.(services) His research areas include statistical learning theory for neural networks, support vector machines and ensemble learning techniques. He contributed to the field of signal processing working on time-series analysis, statistical denoising methods and blind source separation. His present application interests are expanded to the analysis of biomedical data, most recently to brain computer interfacing, genomic data analysis, computational chemistry and atomistic simulations.

Machine learning and AI for the sciences -- towards understanding

In recent years machine learning (ML) and Artificial Intelligence (AI) methods have begun to play a more and more enabling role in the sciences and in industry.

In particular the advent of large and/or complex data corpora has given rise to new technological challenges and possibilities.

The talk will touch upon the topic of ML applications in sciences, here, in Neuroscience and Physics and discuss possibilities for extracting information from machine learning models for furthering our understanding by explaining nonlinear ML models.

Finally briefly perspectives and limits will be outlined.

Dr. Henrik I. Christensen is a Professor of Computer Science at Dept. of Computer Science and Engineering UC San Diego. He is also the director of the Institute for Contextual Robotics. Prior to UC San Diego he was the founding director of Institute for Robotics and Intelligent machines (IRIM) at Georgia Institute of Technology (2006-2016). Dr. Christensen does research on systems integration, human-robot interaction, mapping and robot vision. The research is performed within the Cognitive Robotics Laboratory. He has published more than 350 contributions across AI, robotics and vision. His research has a strong emphasis on "real problems with real solutions". A problem needs a theoretical model, implementation, evaluation, and translation to the real world. He is actively engaged in the setup and coordination of robotics research in the US (and worldwide). Dr. Christensen received the Engelberger Award 2011, the highest honor awarded by the robotics industry. He was also awarded the "Boeing Supplier of the Year 2011" with 3 other colleagues at Georgia Tech. Dr. Christensen is a fellow of American Association for Advancement of Science (AAAS) and Institute of Electrical and Electronic Engineers (IEEE). He recieved an honorary doctorate in engineering from Aalborg University 2014. He collaborates with institutions and industries across three continents. His research has been featured in major media such as CNN, NY Times, and BBC.

There is now an abundance of cameras in the world. The cost of a camera in

volume is about $1. The opportunity to recognize everyday objects, perform servoing

to interact with objects, recognize people and estimate their pose opens many

interesting opportunities for designing systems for use in manufacturing, service and

healthcare applications. In this presentation we will present embedded vision applications

for daily tasks and outline how progress on recognition, pose estimation, 3D model

Dr. Wolfe is Professor of Ophthalmology and Professor of Radiology at Harvard Medical School. He is Director of the Visual Attention Lab and the Center for Advanced Medical Imaging at Brigham and Women's Hospital. Wolfe received an AB in Psychology in 1977 from Princeton and his PhD in Psychology in 1981 from MIT under the supervision of Richard Held.

His research focuses on visual search and visual attention with a particular interest in socially important search tasks in areas such as medical image perception (e.g. cancer screening), security (e.g. baggage screening), and intelligence. He is Immediate Past-Chair of the Psychonomic Society and just ended his term as Editor of Attention, Perception, and Psychophysics.

The Incidental Gorilla: What can the science of visual attention tell us about the art of radiology?

We cannot simultaneously recognize every object in our field of view. As a result we deploy attention from object to object or place to place, searching for what we need. This is true whether we are looking for the cat in the bedroom or nodules in a lung CT. We do not search at random. Our attention is guided by the features of the targets we seek and the structure of the scenes in which those targets are embedded; again, whether that scene is the bedroom or the lung. Unfortunately, our search engine does not work perfectly and we sometimes fail to find what we seek. When those missed targets are such things as tumors or bombs, these errors are socially significant, worth understanding and, if possible, correcting. In this talk, I will illustrate some of the basic principles of human visual attention and I will present data showing how those principles play out in the realm of medical image perception.

Gustau Camps-Valls is an associate professor (hab. Full professor) in the Department of Electronics Engineering. He is a research coordinator in the Image and Signal Processing (ISP) group. He has been Visiting Researcher at the Remote Sensing Laboratory (Univ. Trento, Italy) in 2002, the Max Planck Institute for Biological Cybernetics (Tübingen, Germany) in 2009, and as Invited Professor at the Laboratory of Geographic Information Systems of the École Polytechnique Fédérale de Lausanne (Lausanne, Switzerland) in 2013.

He is interested in the development of machine learning algorithms for geoscience and remote sensing data analysis. He is an author of 120 journal papers, more than 150 conference papers, 20 international book chapters, and editor of the books "Kernel methods in bioengineering, signal and image processing" (IGI, 2007), "Kernel methods for remote sensing data analysis" (Wiley & Sons, 2009), and "Remote Sensing Image Processing" (MC, 2011). He's a co-editor of the forthcoming book "Digital Signal Processing with Kernel Methods" (Wiley & sons, 2015). He holds a Hirsch's index h=48 (see Google Scholar page), entered the ISI list of Highly Cited Researchers in 2011, and Thomson Reuters ScienceWatch identified one of his papers on kernel-based analysis of hyperspectral images as a Fast Moving Front research. In 2015, he obtained the prestigious European Research Council (ERC) consolidator grant on Statistical learning for Earth observation data analysis. He is a referee and Program Committee member of many international journals and conferences.

Earth observation from satellite sensory data pose challenging problems, where machine learning is currently a key player. In recent years, Gaussian Process (GP) regression and other kernel methods have excelled in biophysical parameter estimation tasks from space. GP regression is based on solid Bayesian statistics, and generally yield effcient and accurate parameter estimates. However, GPs are typically used for inverse modeling based on concurrent observations and in situ measurements

only. Very often a forward model encoding the well-understood physical relations is available though. In this talk, we introduce three GP models that respect and learn the physics of the underlying processes

in the context of inverse modeling. First, we will introduce a Joint GP (JGP) model that combines in situ measurements and simulated data in a single GP model. Second, we present a latent force model (LFM) for GP modeling that encodes ordinary differential equations to blend data-driven modeling and physical models of the system. The LFM performs multi-output regression, adapts to the signal characteristics, is able to cope with missing data in the time series, and provides explicit latent functions that allow system analysis and evaluation. Finally, we present an Automatic Gaussian Process Emulator (AGAPE) that learns the unknown forward physical model in a compact form. AGAPE exploits

interpolation and smart acquisition functions that favor sampling in low density regions and flatness of the approximating function. Empirical evidence of the performance of these models will be presented

through illustrative examples of vegetation monitoring and atmospheric modeling.

Michael Felsberg received a Ph.D. degree in engineering from the University of Kiel, Germany, in 2002. Since 2008,

he has been a Full Professor and the Head of the Computer Vision Laboratory, Linköping University, Sweden. His current research interests include signal processing methods for image analysis, computer and robot vision, and machine learning. He has published more than 100 reviewed conference papers, journal articles, and book contributions. He was a recipient

of awards from the German Pattern Recognition Society in 2000, 2004, and 2005, from the Swedish Society for Automated Image Analysis in 2007 and 2010, from Conference on Information Fusion in 2011 (Honorable Mention), from the CVPR Workshop on Mobile Vision 2014, and from ICPR 2016 (best scientific paper in Computer Vision). He has achieved top ranks on various challenges (VOT: 3rd 2013, 1st 2014, 2nd 2015, 1st 2016; VOT-TIR: 1st 2015 and 2016; OpenCV Tracking: 1st 2015; KITTI Stereo Odometry: 1st 2015, March). He has coordinated the EU projects COSPAL and DIPLECS, he is an Associate Editor of the Journal of Mathematical Imaging and Vision, Journal of Image and Vision Computing, Journal of Real-Time Image Processing, Frontiers in Robotics and AI. He was Publication Chair of the International Conference on Pattern Recognition 2014 and Track Chair 2016, he was the General Co-Chair of the DAGM symposium in 2011, and he will be general Chair of CAIP 2017.

The tutorial will explain how to use Deep Features for enabling state-of-the-art results in computer vision tasks, in particular visual object tracking. Visual object tracking is a difficult task in three respects, since a) it needs to be performed in real-time, b) the only available information about the object is an image region in the first frame, and c) the internal object models needs to be updated in each frame.

The tutorial will cover some basic theory of Deep Features, both for visual appearance and optical flow. Basics about multi-layer networks, receptive fields, convolutional layers, pooling, and invariance will be explained. The different levels of Deep Features cover respectively different aspects of the input data and it will be explained what kind of information is covered by these levels. Since the spatial resolution varies between layers, fusing of multi-level Deep Features is non-trivial and the tutorial will explain how this is achieved in an efficient way. Finally, not all feature dimensions are required to solve the addressed task and although a certain feature might be highly informative, its relevance to the addressed task might be low. In its final part, the tutorial will explain how to select relevant feature dimensions.